In one of our previous blogs, we featured Victor D’Amico, the man credited for establishing arts education as a nationwide subject. His determination to make art a fun and creative process truly changed the way we see art today.

Edith Kramer, like him, believed in the power of art and its ability to change and enrich the lives of people. In her own life, art had been an enormously positive influence, and Kramer wanted to use it to help people struggling with psychological disorders. Although Kramer was not the first person to bring art therapy to the forefront, her humanist approach set her apart from the rest.

In this article, we’ll continue to spotlight influential people in the art world by looking back at the life and work of Edith Kramer, the Mother of Art Therapy. 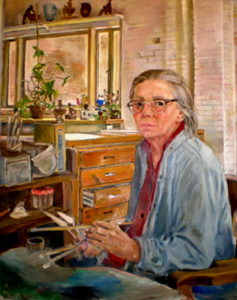 Self Portrait by Edith Kramer. Via Edithkramer.com.

Born in Vienna, Austria in 1916, Kramer did not officially begin studying art until she was thirteen, when Friedl Dicker came into her life. Dicker was a well-known artist and teacher in Austria who would go on to have a huge impact on Kramer’s life and career. Under Dicker, Kramer studied drawing, sculpting, and painting. Kramer wished to continue to learn from her teacher as she entered her young adult years, and decided to travel with her to Prague where the pair began to work with refugee children.

Through working with children whose lives had been uprooted by Nazi Germany, Kramer began to see the transformative power of art firsthand. Sadly, this time was short-lived; Kramer was forced to flee to the United States as a political refugee herself, while her mentor, Dicker, was sent to a Nazi ghetto where she was ultimately killed.  It was after settling down in New York that Kramer learned of the death of her mentor. The loss of such an influential figure in her life was devastating, but Kramer chose to take what she learned from Dicker as well as her drive to help others, and made it her own. 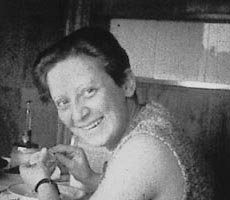 Friedl Dicker, who taught art classes, even within the Nazi ghettoes, was a huge influence in Kramer’s life. Via Pinterest.

Just as she had been guided through her formative years by her mentor, Kramer wanted to do the same by teaching and helping others. Her career as a teacher began with three years of sculpting in New York. Art and therapy did not come together for her until she was in her thirties, when she took a teaching job at a children’s residential treatment facility. The boys she worked with there had severe behavioral and emotional disorders. Because of this, they also had difficulty expressing themselves, and Kramer’s job was to pull their emotions out of them through art. Though this work was challenging, she found it incredibly rewarding and it ultimately inspired her to develop her philosophy on art therapy. 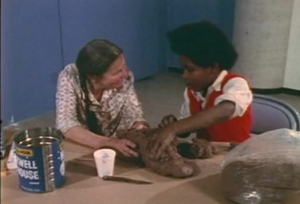 Edith Kramer and her student working on a clay sculpture. Via YouTube.

The Art of Sublimation

During her time working with these students, Kramer began to meld arts education with various psychotherapy techniques and ideas. At the forefront of this work was Sigmund Freud’s theory on “sublimation”. Kramer prescribed to the idea that destructive impulses and emotions could be redirected and transformed into productive action. In practice, this meant that Kramer would redirect her student’s negative emotions into art and self-expression. She also believed that finishing a piece of art could provide a “healing” effect on the person receiving art therapy. A child admiring his or her finished sculpture, for example, could help improve their confidence and self-esteem and evoke a sense of accomplishment. During her fourteen years working at the Jewish Guild for the Blind, Kramer continued to develop her ideas and theories on art therapy. 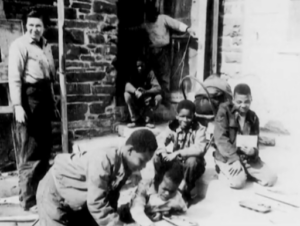 While working with students with disabilities, Kramer realized that they often needed a helping hand with certain tasks. Instead of imposing her own ideas or art style on the students, she aimed to become a “third hand” for them. Her goal was to simply support what they were already in the process of making, no matter what it was. An example of this application would be helping a child fix their clay figure that keeps falling apart by showing them how to reinforce the legs. Kramer believed that the third hand technique could benefit not only students with disabilities, but anyone. 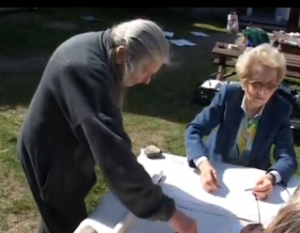 Kramer believed the Art Therapist Third Hand could be helpful in working with people of all ages. Via YouTube.

Although Kramer was not the first person to use art in therapy, her approach certainly set her apart. Over the years, historians and educators have compared her to another trailblazer in the field of art therapy, Margaret Nambung. While Nambung believed art was an important tool in therapy, Kramer believed that the art itself was therapy. Kramer observed her students with severe emotional and behavioral problems harness their “anger, anxiety, and pain” and express it visually in their art. This humanist approach turned heads, and Kramer quickly became a leading figure in the world of art therapy. 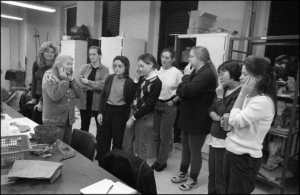 Kramer with her Art Therapy students at NYU. Photo by H. Stroyman.

Throughout her career working with her students, she never stopped making art. Her artwork fell under the Social Realism art movement, as she frequently painted and sketched the working class in urban settings. In 1976, Kramer founded the Art Therapy graduate program at New York University where she taught for twenty-five years. For her extensive work and dedication to the community, she was awarded the Life Member Award by The American Art Therapy Association. 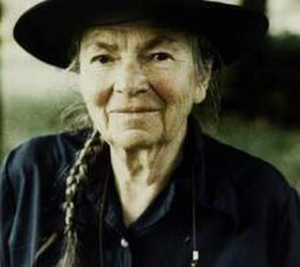 Kramer was eventually drawn back to Austria, the place where she grew up and first became interested in art. She spent her remaining years in the beautiful scenery of Grundlsee Lake, where she passed away at 97-years-old. Her long career working with students of all ages is a testament to her desire to use art to help and heal. Today, her name is synonymous with empathy and selflessness, and her influential work helped usher in new and creative forms of therapy that are still used today.